It’s 2022 and we have been living in some very uncertain and tying times.  Our mental and physical fortitude have been tested to our personal limits.  I am positive all of us have learned a little more about what we are made of from the periods of 2020 to today, 2022.

I can recall the start of the pandemic where I personally was faced with the obstacles of how to deal with operating a small business that relies on close contact training.  Krav Maga specifically, as it translates to “Contact Combat”.  Not exactly the most pandemic friendly services to be offering.   Yet at the same time, Krav Maga offers what people needed most during that time, meaning a productive way to vent frustrations and take out aggression in a safe and productive manner.  This also provides a healthy boost to one’s physical and mental health (a point often forgot in the pandemic response).

Fast forward to today and I am happy to say that our school is in the rebuilding process and we are able to provide our award winning and highly reviewed Krav Maga and Muay Thai programs to the community of downtown Toronto and the GTA.  This brings me to a subject that is a valuable to reminder to all Krav Maga practitioners and instructors alike.  The Mentality of conflict, as it relates to Krav Maga. This is what had attracted me to Krav Maga over 17 years ago.  I had trained other disciplines my whole life and I always thought in the back of my head “how good would this work in real life?”  I knew some aspects of other Martial Arts would be effective in the real world but I also had some secret doubts due to the flaws I would see.  Those flaws made themselves known when I began working the the Correctional system as an Officer in the year 2001.  I had been a fairly proficient kick-boxer in my younger years and thought “If anything happens, I’ll be able to handle myself”.  That thought got completely dismantled in first riot I responded to.  I was working a unit with rival gang members who somehow found themselves housed on the same unit.  I will mention that this was an American jail and gang violence was very prevalent at this facility.  When I responded to the commotion, I did not freeze, I did my job and jumped in to help and eventually break up  the fights.  This particular incident involved weapons, multiple offenders and direct assault on staff.  After the dust settled, I realized my formal training in Karate and Kickboxing respectfully did NOT translate at all to what I had been though in the jail fight.  I immediately went home and googled “street fighting Martial Arts” and enter Krav Maga.  Shortly afterwards I returned to Canada.   I went to the school closest to my home and luckily, I found one of the best Krav Maga Instructors I have ever met (even to this day). I spent the next 5 years working towards learning all I could, training as often as possible and I earned my Krav Maga Black belt. 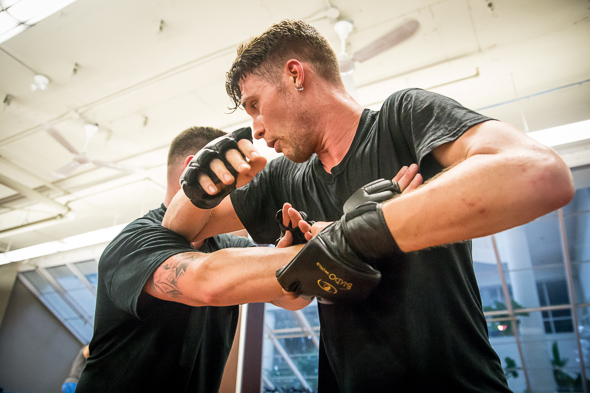 The biggest lesson I had learned as a student in Krav Maga, was the mentality of conflict and how it applies to a real world confrontation.  In Krav Maga training ,we do class after class of reality based training and we push ourselves to our limits, both mentally and physically.  Each Krav class ends with a gruelling exhaustion drill, usually based on what was taught in class.  We cover all aspects of real world confrontations.  The aspect of Krav Maga that gave me the most confidence was KNOWING this would work in real life and the mentality of NEVER giving up.   This mentality is instilled in you with each class you take.

As I progressed through my Krav Maga training, I was advancing through my career in Corrections.  The lessons taught in classes were a HUGE asset to me as an officer.  Many times I was able to defuse a would be fight by using my communication skills and deescalation tactics (also taught in class).  When things did go bad, I was also able to confidently handle the situation to keep myself, my fellow officers and offenders safe under any circumstance.

Krav Maga is more than a self defence system.  It is more than a Martial Art.  It is a mentality that becomes ingrained in you the longer you train.  It becomes a part of you that you always carry with you.  It provides a confidence that goes far beyond the classroom.  In Krav Maga, I had found what was lacking in other Martial Arts, an ability to confidently deal with confrontation, based on a mentality to push through any obstacle, no matter what.  Quitting is NOT an option in Krav Maga.  This lesson learned in class has a direct translation into everyday life.  Whereas in life, you may run into a situation that has nothing to do with fighting but you can tap into that new found mentality and confidence and think “I have been though worse.  I will get through this.  Quitting is NOT an option”

This is the beauty of Krav Maga.  For anyone who has not experienced the training, I highly recommend you try a class, give the training a real shot and see where it takes you.  Enjoy the many benefits that are the direct byproduct of the training!

I look forward to seeing you in class and being a part of your Krav Maga Journey,